Life After Social Media: The Return Of Creativity

It has now been three months since I left Instagram and Facebook and since my iPhone is no longer my loyal companion. In fact, I replaced it with a fixed lens camera that is as analogue as a digital camera can be. 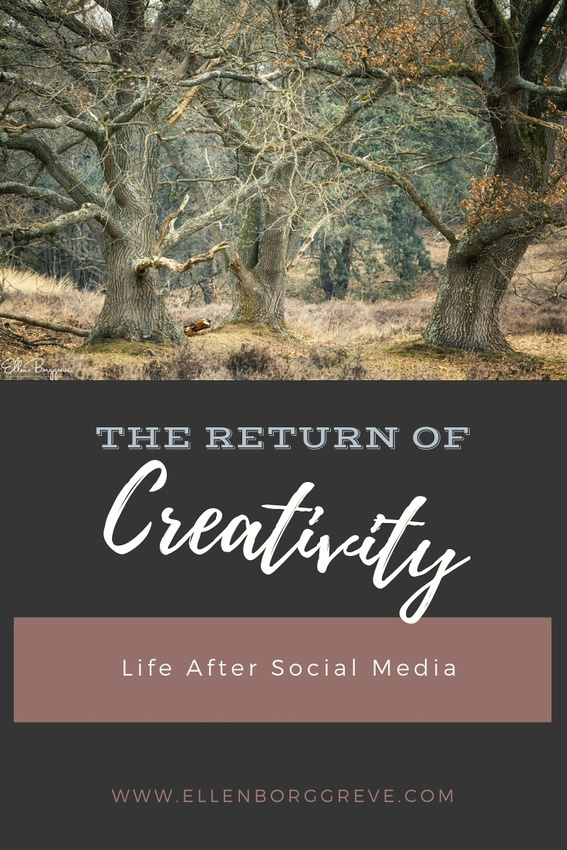 Life After Social Media: The Return of CreativityLife after social media for me meant more freedom to create without the pressure of having to live up to the expectations of followers and keeping a constant looking feed.

Life after social media is surprisingly calm and creative. Many hours are spent quietly doing research for books I am planning to write, more hours are spent on studying compositions, reading, walking and making images oh....and sleeping.

Over the past few months it became even more clear that I want to make images for me, because I want, no: need to make them. I really missed the days where creativity soared, where my photography was free and inspired. Where the burden of so much knowledge and experience had not yet weighed down on spontaneity. I spent quite a few hours locating the images that I consider to be free of pressure and must admit to feeling slightly unhappy to see how experience and lessons learned has had its effect on creativity. 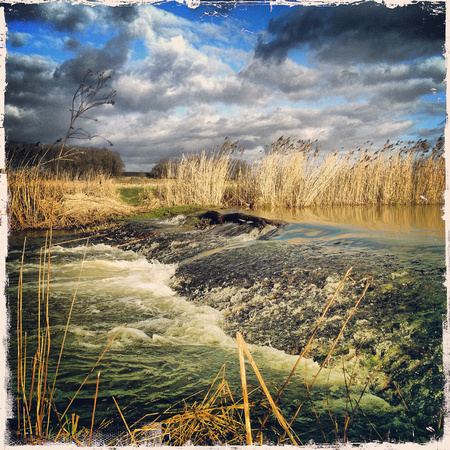 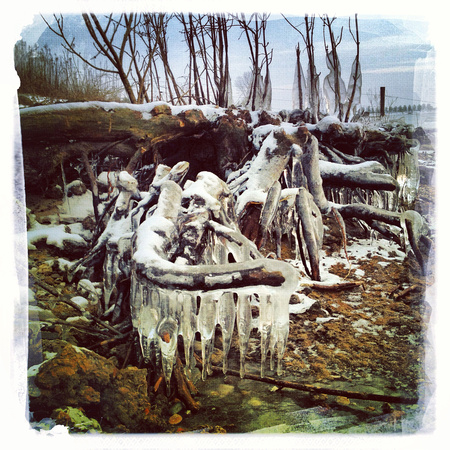 Examples  of snapshots from 2011 with the Hipstamatic app on my iPhone 4s, perhaps unpolished and not the greatest pictures, but spontaneous, playful and intuitive

Experience might be positive, but it can also lead to hitting a creative plateau. You become the photographer who knows how to take a relatively good image almost without much thinking and somewhere along the line you loose the experimentation that is such a vital part of being creative. You get to a point that you don't want to risk making a mistake, you are so busy getting all the details right, analyzing all the elements, that you risk losing "the soul" of the image. The intuitive response to something that speaks to us can easily be analyzed to death by too much rationalization.

I love forests, I make most of my images there, but not all. I live in an area that is more like a wetland area on the banks of a river. I love the early morning light on the river, the steam floating over the surface of the cold water when the sun hits it, I love the trees on the river banks looking dramatic in raging storms. I love how water changes the landscape constantly. When the river floods, it takes over the meadows and the fields close to my home. The water reflects so much light that the atmosphere becomes brighter, the trees look like they are floating and then, the water recedes again, some of the landscape has been changed forever as a result even though life simply picks up where it left off. 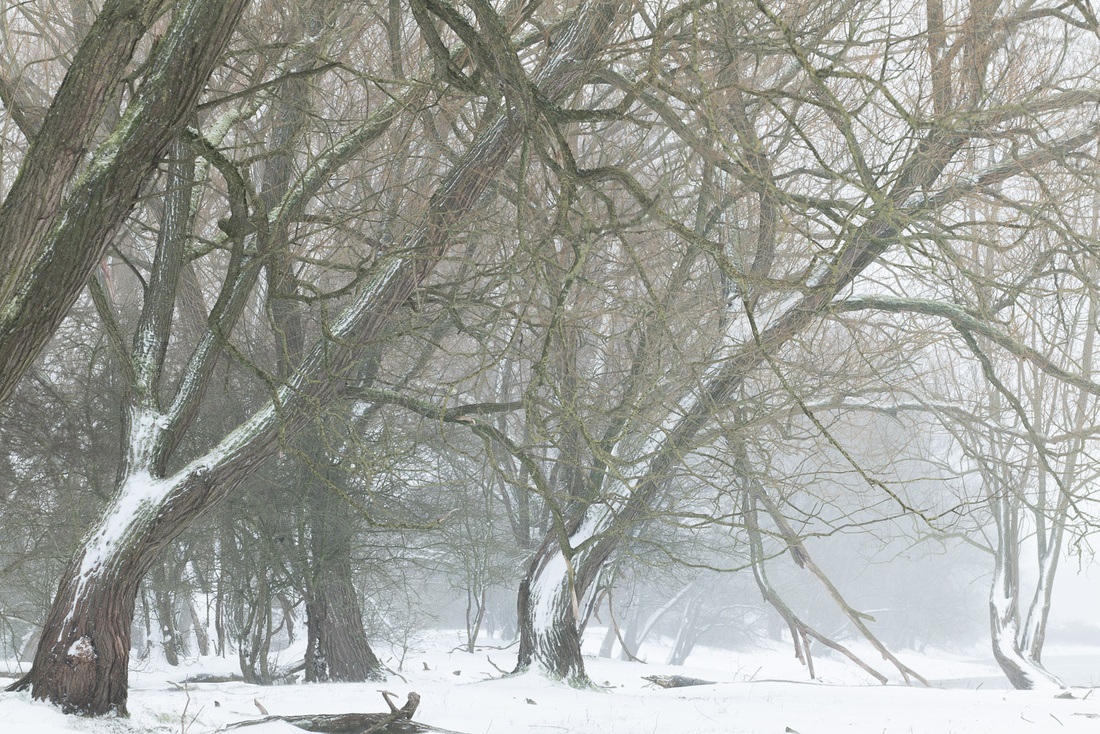 Unedited image from the 7th of February 2021, not a forest, but a group of trees in my local wetland area

In February we got snow, we got so much of it that driving was impossible. We simply could not leave our house by car and at first this felt like a nuisance. I had also conveniently cut in my hand with a bread knife in such a way that driving was not much of an option anyway and so I had to stay close to home. I waded through the snow that was well over knee-deep here and in a lot of places even made me sink into it up until my hips, but I was determined to take pictures. Of course, I tried to find some trees in the snow, because this after all is what I do. What happened instead was that the snow prevented me from going much further and I took pictures of the surreal snow dunes. The pictures turned out quite minimalist and abstract, because well, there was nothing there except snow. Some people hated these pictures, because they were not "me". What they meant was that these pictures did not fit in with how they thought of me. The me they see, might not come close to the me that I believe myself to be. Most of my favourite photographers create minimalist and quite abstract images. I love the clean and uncluttered look of their images, the stillness captured in a minimum of elements. 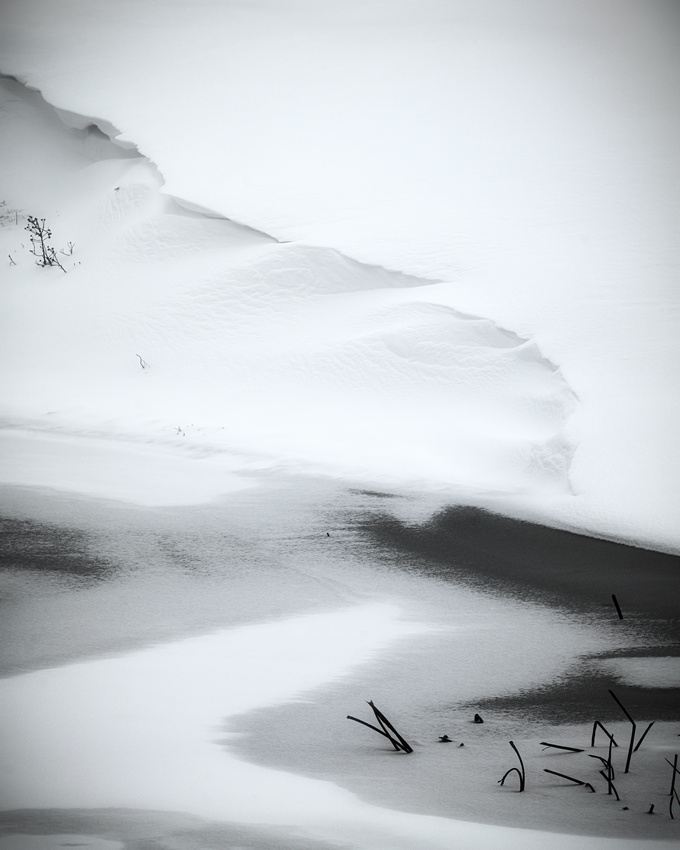 Abstract image of the snow dunes of the 8th of February. This was the only way to really tell the story of how unreal the landscape was looking with this vast amount of snow that we had

I took the pictures during a snowstorm and this meant that the atmosphere was hazy and my footsteps disappeared behind me. It was as if this landscape, so close to my home (less than 100 meters), was completely new. Nothing looked familiar, the snow had taken all of the literal away from the landscape....bush, grass, water, river bank, tree trunk....Nothing existed anymore just white snow dunes and just in some areas where the wind had not pushed the snow up to incredible heights there were some lonely trees. It was spectacular and even though I had initially been annoyed that I could not go to the forest when for once there was snow, it turned out that I learned more about photography a few steps away from my front door than I would have in the forest. If I had been successful in driving to a forest, my experience would have taken over, I would have probably built upon pictures I had made in the past or even repeated them in the snow. Now that I was unable to do this, I was forced to do something completely different. 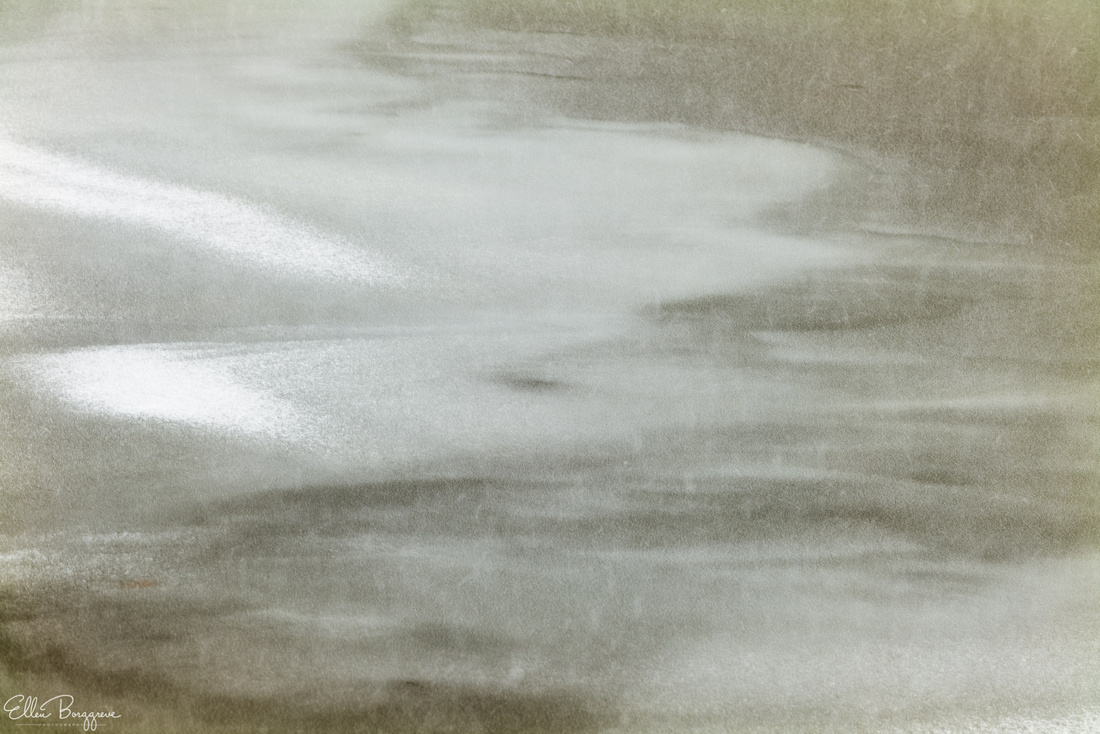 The snowstorm was so bad at times that all I could do was point the camera down to capture drifting snow on the water surface that had now been frozen. It created strange abstract shapes and lines that looked like they were flowing. When the wind had died down I could capture this tree, which was the only one with its trunk still firmly above the snow. I love this little tree and had always wanted to make an image of it. I made a colour and black and white conversion of this image, but they have not been heavily processed. Instead they were very slightly adjusted in Lightroom to keep the subtleties of the atmosphere intact. 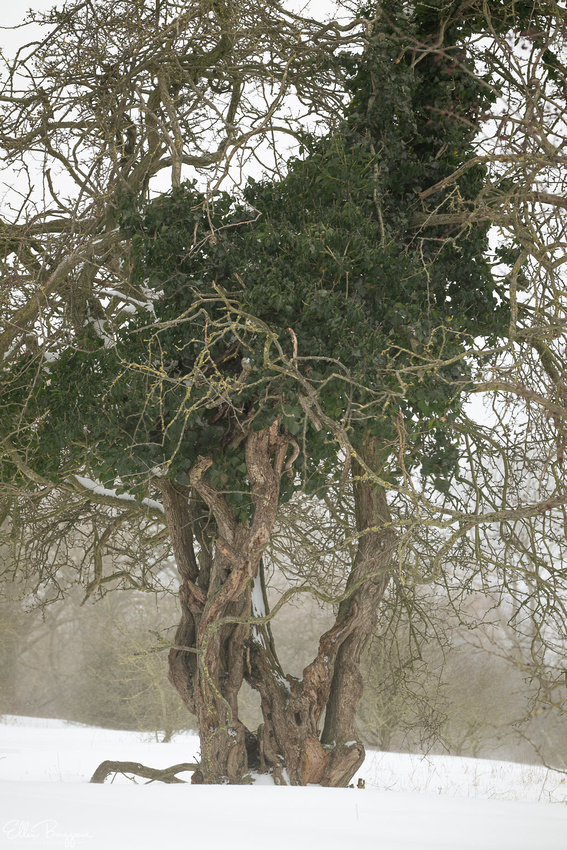 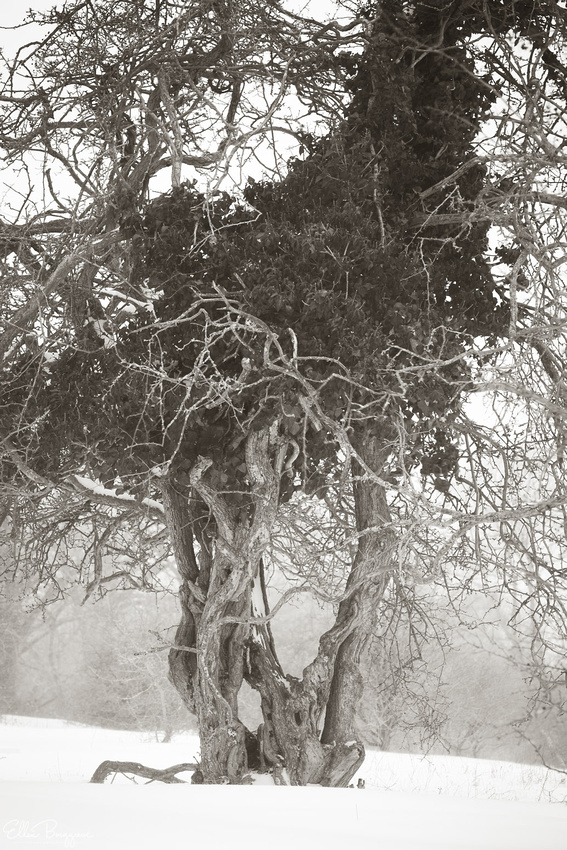 None of these pictures might ever make it into my portfolio and that is totally fine by me. The experience of being in this bizarre landscape, which looked nothing like I had ever seen before, with incredibly high snow dunes which made walking impossible, was the reason I went out with the camera. I stood there at first trying to take a more familiar picture, something I am known for, but what struck me were the bizarre and abstract qualities of the landscape. It looked unreal to me and this was the impression I had, so that made me decide that  I would make an image that was true to that impression.

More about my experiments in photography and background information of recent images is made available to subscribers of my newsletter. Please consider subscribing if you would like to get more inspiration delivered to your inbox.

If you'd like to learn forest photography in all seasons, you might want to consider purchasing my eBook The Magic Of Forest Photography. Doing so will support my writing these articles on my blog.

Tony Cearns(non-registered)
I think we all have a love/hate relationship with social media. I myself enjoy being part of my groups (i have made several photography friends whom i have met physically and worked together) but I have to watch that i do not chase approval and likes.