Framed: The Edges Of The Image

A lot can be said about composition in photography, but often the frame itself, the aspect ratio, is forgotten when composing. Very often the sensor of the camera defines where the edges of the frame will be without the photographer questioning if this is the best aspect ratio for the subject. 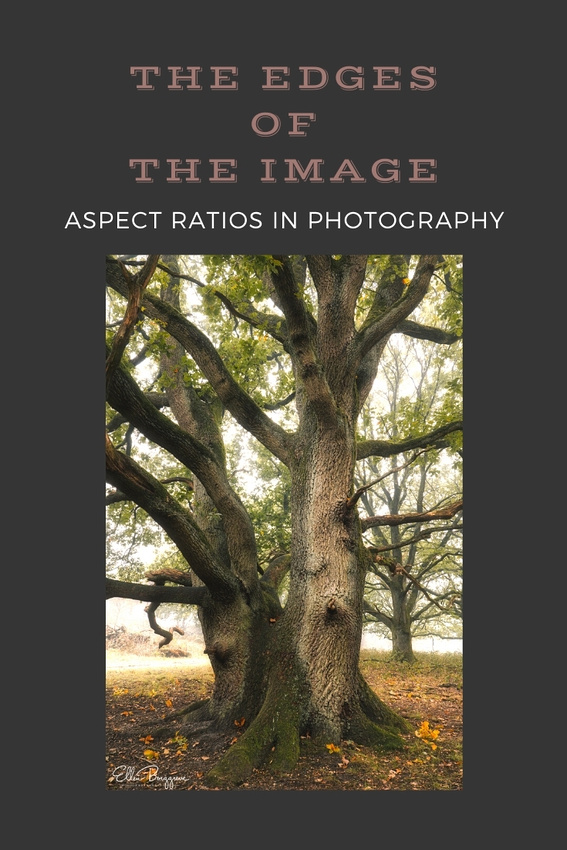 The Edges Of The Image, Aspect Ratios In PhotographyThe aspect ratio you choose for your images has a huge impact on the composition. Choose one wisely and your pictures will be stronger as a result

A few months ago I read an essay by a photographer, who absolutely detests the 2:3 aspect ratio, which is the ratio that is being widely used by a number of cameras. I can't argue with him not liking the aspect ratio, because I feel that just like everything else in life and photography, this is one of those things that is very subjective and dependent on the photographer's way of seeing . I did however find reason to disagree with his statement that no painter ever chose to use this aspect ratio. I immediately felt this could not be true. I have a huge library of art books and set to work on calculating the aspect ratios of the paintings in these books. After one evening I already knew that 2:3 had indeed been used by many painters, but by the second evening I found that someone like the world renowned JMW Turner had canvases made specifically in this aspect ratio. Many Flemish painters had used this aspect ratio as well as German and Dutch painters in the Romantic era.

After I had calculated the aspect ratio of  hundreds and hundreds of paintings I was satisfied knowing that 2:3 was not just a technical aspect ratio introduced by the 35 mm camera, but that it had been used by painters, amongst which some who actually favoured it. 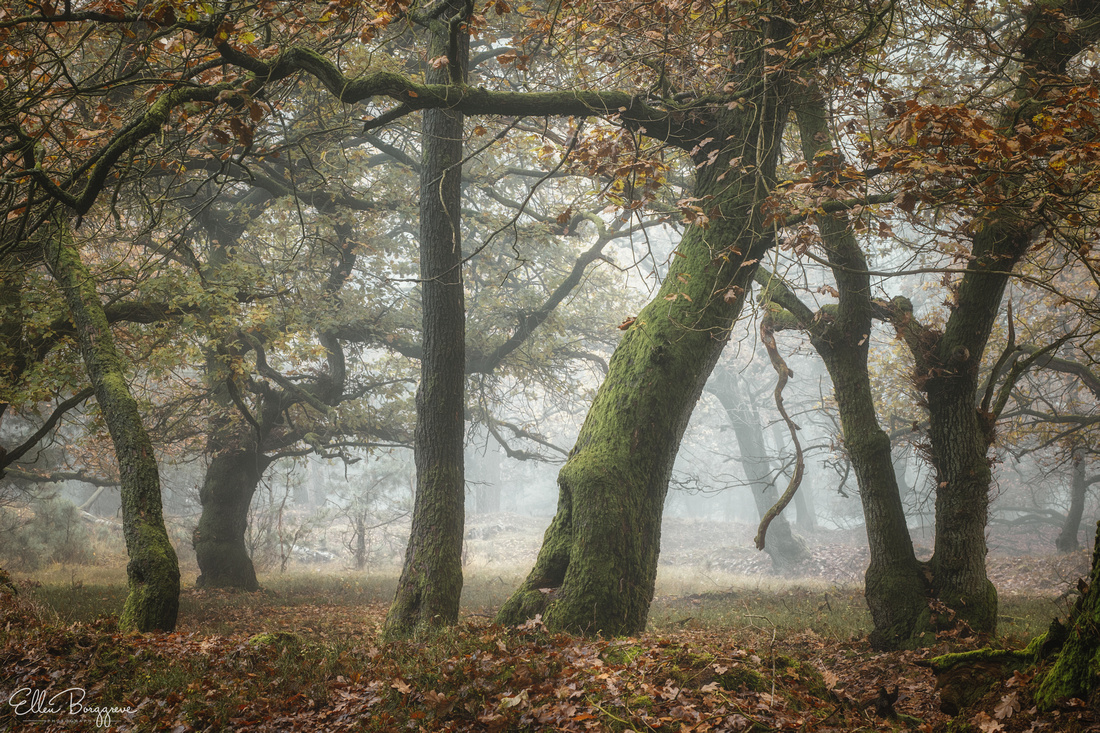 A picture that demands a horizontal frame because of the trees that are bending to the left and right part of the frame. This adds to the dynamic lines and shapes present in the scene

The entire research had made me think though. Was I being lead by the aspect ratio set by my camera, had I been wrong to never doubt where the edges of my frame were?

To crop after the capture was not really an option if I wanted to know if I could compose images in another aspect ratio and so I put one of my cameras on the 1:1 aspect ratio, which I believed to be the most impossible one for forest imagery. The reason that I believed this to be true is that trees sort of dictate the frame by being wide branched (horizontal) or being tall and vertical. I certainly do not see in squares, but thought I'd force myself to think in squares. 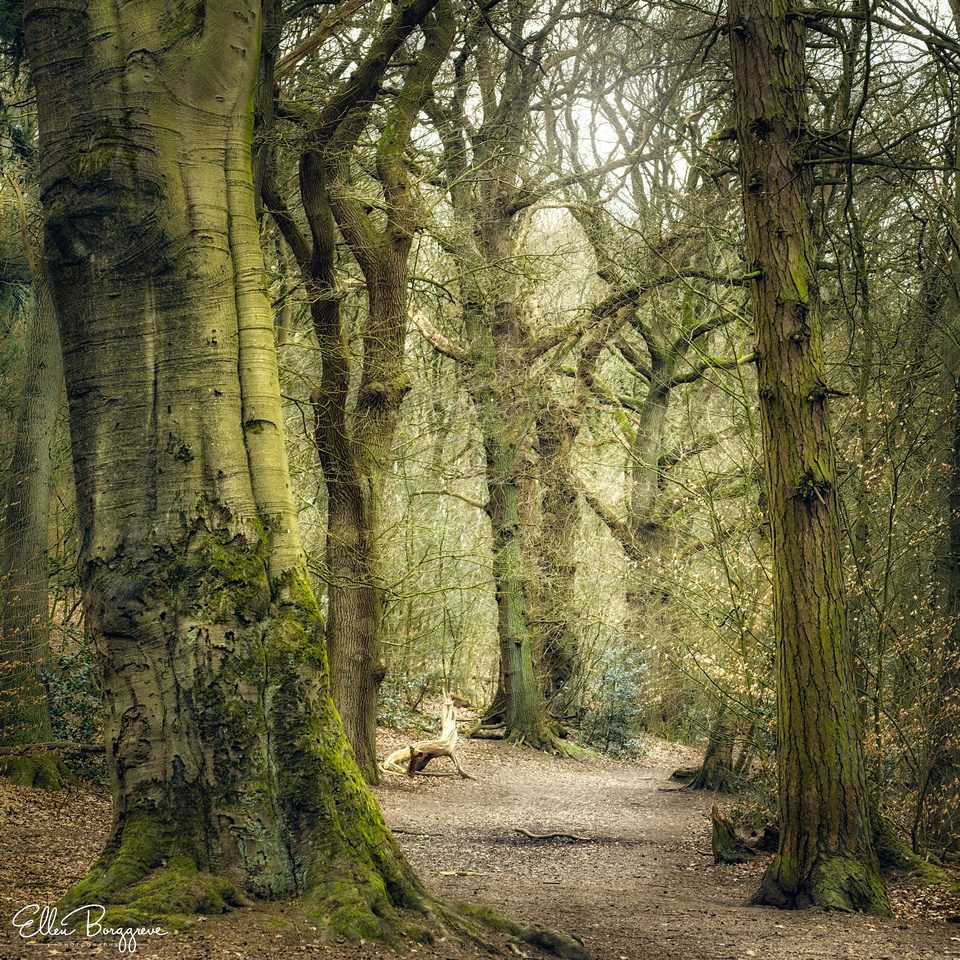 A 1:1 aspect ratio picture of a forest path that works because this frame leaves out parts of the forest on the left of this frame that were not adding anything to this scene and it also nicely excluded most of the sky, which is something to be aware of when photographing bare trees

One month passed and I must admit that I struggled to make squares work. In the next month I put both my cameras on different aspect ratios to see what would happen. I went out in all kinds of weather, mostly unfavorable to forest photography, just to satisfy my curiosity.

To make images in a different aspect ratio, means to look at a scene differently, which is why I chose to set the cameras up to "capture" either a square or a 4:3 rather than cropping in Lightroom or Photoshop after the fact. As I shoot in RAW and the sensor size does not change, the RAW files stay intact, but the crop is being saved in the metadata and so the crop is being transferred over to Lightroom upon importing the files. By clicking the crop tool, the entire 2:3 image becomes visible again. 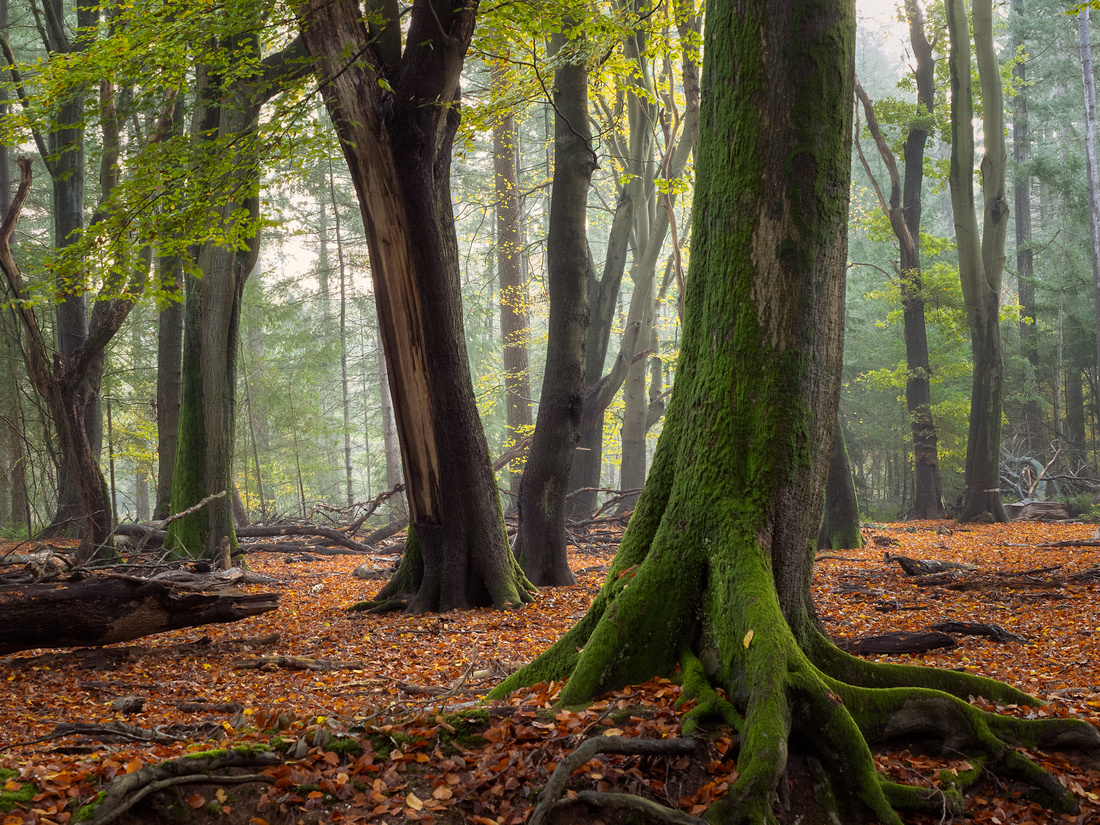 I had loved and used the 1:1 ratio before. As a matter of fact, in 2011 and 2012 I almost exclusively made square images.  I did not photograph forests at the time though, but I did make images of landscapes that to this day continue to come to mind when I think about my most creative time as a photographer. Having loved squares before made me determined to try to like them again and after a few months of struggling with it, I started to see differently, which was why I started this experiment. 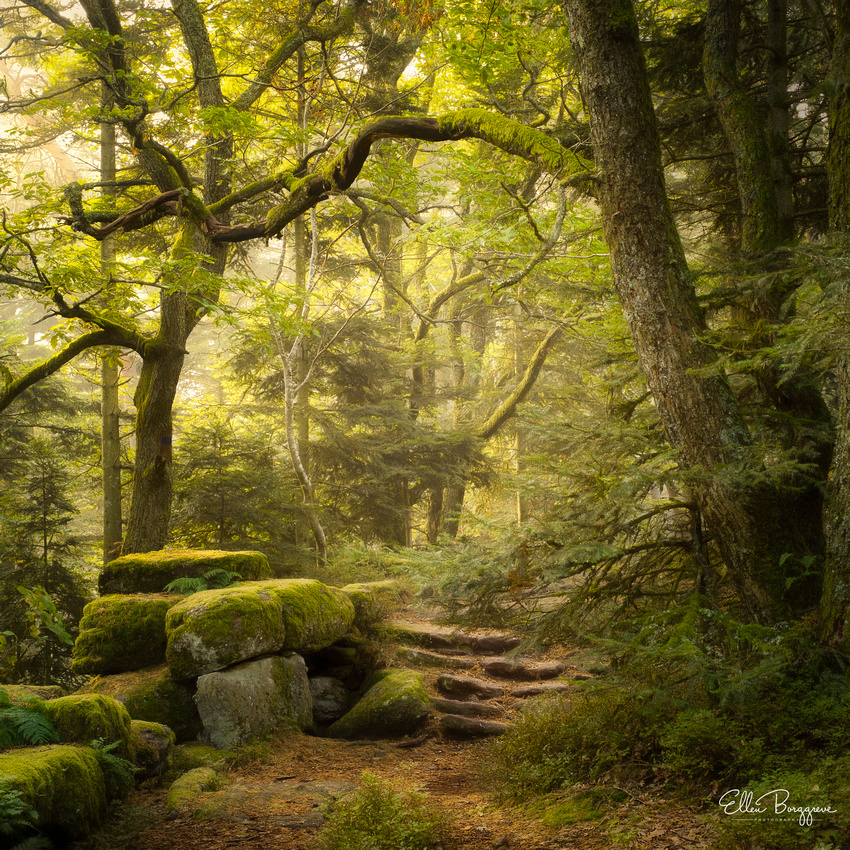 What I feel about this subject is this : I have noticed that my natural way of seeing things does not suit certain aspect ratios very well and I suspect this is the case for everyone. I tend to not like 4:5 ratios even though many of my favourite photographers use it with great success. I also tend to not like 4:3 very much either and I feel I can have an opinion about this as I used to work with 4:3 sensors many years ago. I have noticed that I love squares......sometimes.....for some subjects. I love them for images with not too many elements in it, for more minimalist photographs. I also love them for different kinds of trees, the smaller and quirky ones.

I do believe however that some subjects dictate the frame. Very tall trees with the interesting branches starting high up don't call for horizontal images or squares. They beg to be photographed as verticals. Forest scenes in winter, when large patches of sky are visible in the upper part of the frame, might suit a horizontal or square frame better though. It all depends. 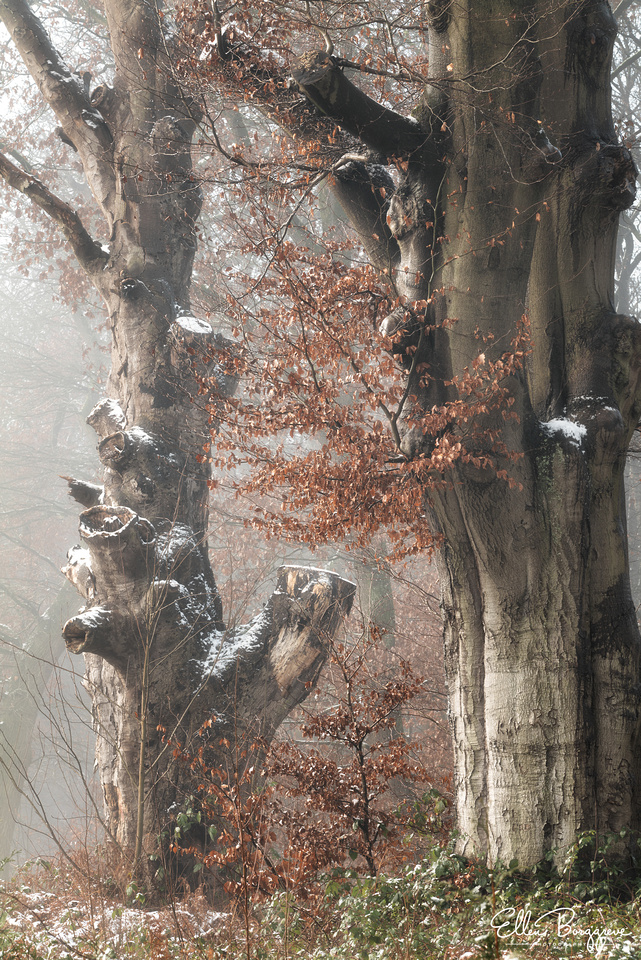 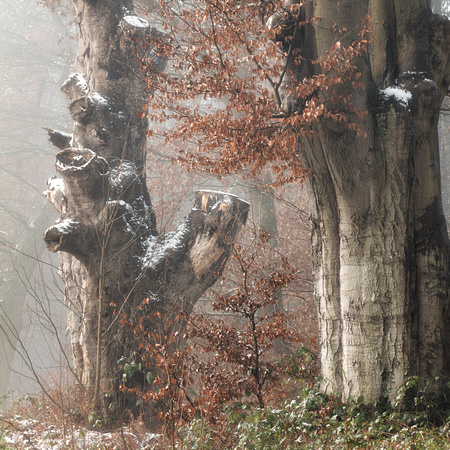 This would happen if I cropped this image into a square in Lightroom. I would loose bits of the composition that I think are vital to its success. If I had tried to make a square image of this scene in the field, I would have had to choose a different focal length, found another point of view and placed the elements in the frame in a way that the important parts would be included in the frame. This image begs to be a vertical though as these trees are interesting over their entire length. Choosing a horizontal frame would have included too much mess in the frame and a square frame just does not look natural in this case

Cropping afterwards is very different to capturing images in a different aspect ratio, because you need to lay out the elements differently in a 2:3 compared to a square. You need to design the picture to suit the ratio and this is a great way of learning as it forces you out of your comfort zone and to see in a different way. Choosing the right aspect ratio is sort of finding the right box to fit around the distribution of elements in your frame so they can be presented to their advantage and suit your way of seeing.

I would suggest you try for yourself which aspect ratio feels natural to you. If you can not set your camera to another aspect ratio, you can always craft a frame from black cardboard and put it over your LCD screen. I have done so for the 4:5 ratio as this one was not available as an option in my camera. Try it for a few weeks at least and see if you start to see differently. If nothing else, it is a very nice experiment that can get you going if you are in a bit of a creative winter rut.

More about my experiments in photography and background information of recent images is made available to subscribers of my newsletter. Please consider subscribing if you would like to get more inspiration delivered to your inbox.

If you'd like to learn forest photography in all seasons, you might want to consider purchasing my eBook The Magic Of Forest Photography. Doing so will support my writing these articles on my blog.