Beyond The Rule Of Thirds

I found myself reading a thread on a photography forum a few weeks ago and slowly following the string of words which were uttered to criticize a certain picture, I was suddenly stopped in my tracks. There it was, the quick judgmental line to make a photographer feel like a stupid person who just does not understand the mechanics of a good composition. It said something like this; "hey, nice colours, but you need to remember that a good composition is about the rule of thirds and you can't place your subject where you put it" 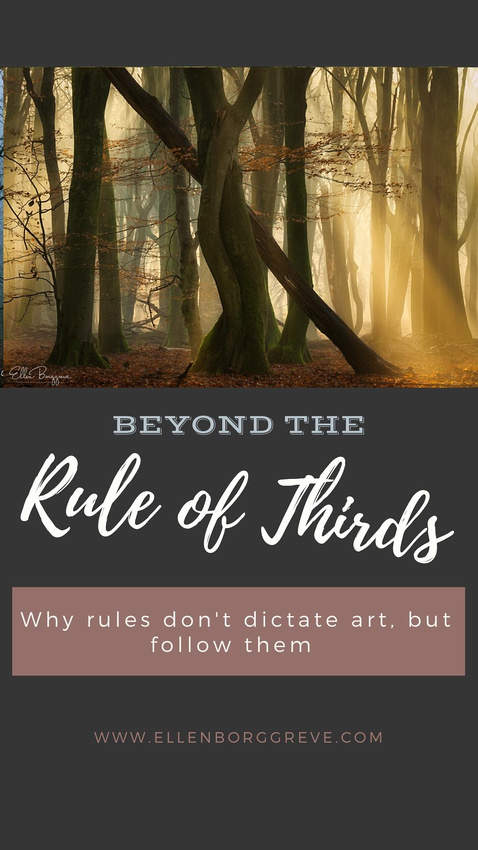 Beyond The Rule Of ThirdsThe rule of thirds is not the holy grail of composition in photography. It is both a gross underestimation of the many ways artists arrange elements to create impactful images and an oversimplification of the process of creating meaningful photography.

I can't bring myself to reply to such judgmental and to be honest, ludicrous comments. It made my heart sink a little as the photographer who shared the image said that he would not forget about the rule of thirds again. It is the same kind of reaction that I have when people used to comment on my forest images saying that I needed to put a person in there for scale.

The thing is, I photograph in the forest to get away from humans and the characters in my photographs are the trees themselves. My photography is not about showing scale. Composition is about the intention behind the arrangement of elements, it is not about rules. It is not science, it is self-expression and to even reduce something as poetic as composition to a rule of thirds is an enormous oversimplification of an artistic endeavor.

I might come up with a smart sentence here to illustrate what I mean, but Kandinsky already did it so perfectly in his book " Concerning The Spiritual In Art" which was published in the beginning of the twentieth century.

It is impossible to theorize about this ideal of art. In real art theory does not precede practice, but follows her. Everything is, at first, a matter of feeling. Any theoretical scheme will be lacking in the essential of creation- the inner desire for expression- which can not be determined"

I wrote about this subject before. Those which we now so easily refer to as rules, are actually theories based on analysis done by people in order to make sense of why "successful" paintings worked. A common denominator was looked for and several were then adopted as rules. We don't actually know for sure if a successful painting worked because of these rules, or because they simply spoke to us on a deeper emotional level. If you look for a common denominator hard enough, you will find one, but this does not mean that is was because of this that an art work appealed to a viewer.

Many of my favourite photographs do not abide to the rule of thirds and some pictures that feel very off to me, do abide to the rule of thirds. Do not rely on a simple formula to create photographs that are supposed to show your inner vision. There is much more that goes into composition than arranging elements on gridlines, no matter what gridlines you use. Perhaps it turns out that by no conscious decision of your own, your photographs do abide to any of these rules (and there are many more than Golden Ratio and Rule Of Thirds), but it might be the case that the elements that make this photo work, have very little to do with the gridlines.

Composition really is so much more than rules and gridlines. It is about colour, the visual weight of certain colours, the absence of colours, the presence of colour, lines, forms, visual rhythm, balance and one of the most important things of all : connections, relationships within the image and the story the image is conveying. 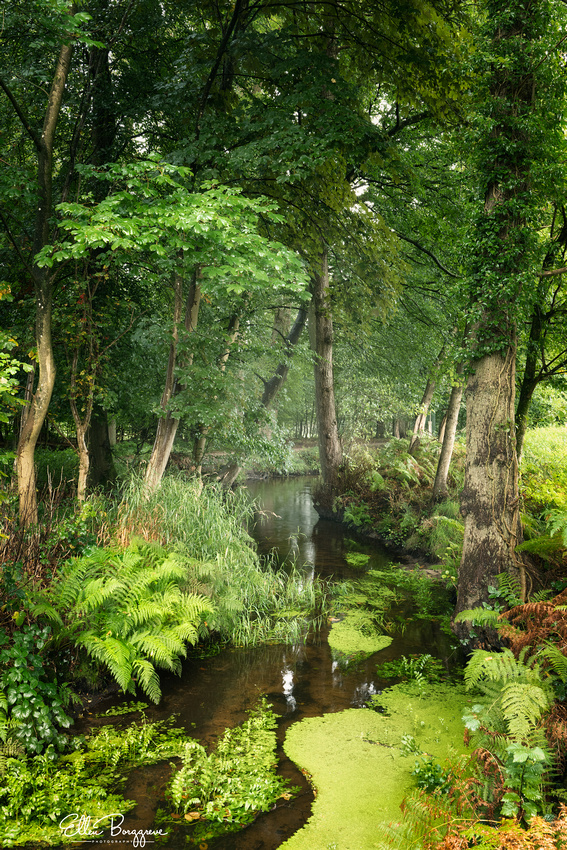 Allow me to give you an example. We have probably all heard about the rule that in order to create a good wide angle landscape image we need a foreground element....I will be bold and say that this is a very limited idea of how to approach landscape photography and it totally omits the fact that in a lot of cases a foreground element is found that diminishes the story and mood of a photograph. It has to add something to the photograph or it should not be in there.

I often think of composition as a way of arranging elements by deleting what is not adding to the story, to the photograph, to the mood. If I can't figure out why something should be in the image, it should not be in there. If having a bright red flower as a foreground element will ruin the peaceful and calm atmosphere of a scene and you feel attracted to the scene because of the peaceful feeling, this bright red flower should not be in there.

Not to mention that a tiny splash of red in a green image will attract the eye so strongly that the scene itself gets lost.

If you are starting out in photography these rules can be useful guidelines, but just the word rules makes me shiver as art is never about rules. Guidelines can help you on your way, but it is more important to start feeling if something feels off in an image, if it feels imbalanced to you. If you understand the why behind these guidelines you can safely let go of them. Composition in visual arts is a bit like the grammar in language, it might help you structure a sentence, but only the words and the way you use them will tell the story. Structure is the foundation, but not the story. Composition is just the way of arranging elements, but they must be the right elements. Also keep in mind that to reduce composition to the rule of thirds is a gross underestimation of the compositional structures found in art. Just read books on classic paintings and their composition and you'll see that it is an enormous oversimplification of matters.

What it comes down to is to choose elements that can be used as vessels for what you want to say in your photograph and arrange them in a way that creates meaning.

To quote Kandinsky again: "The artist must have something to say, for mastery over form is not his goal but rather adapting of form to its inner meaning" 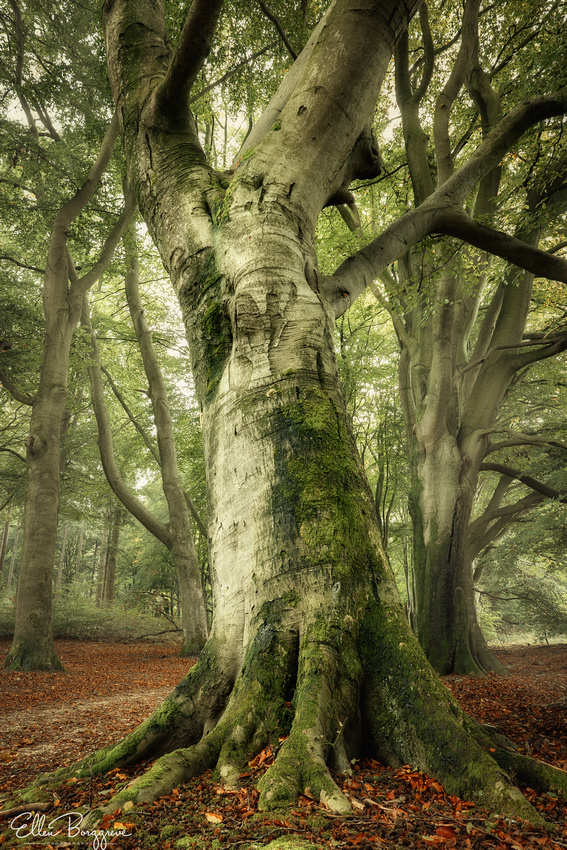 Art is not something that can be reduced to formulas. It is created first, then other people who try to make sense of it, wanting a recipe to success, look at it in an analytical way and figure out a couple of rules. The art came first though, not the rules. Artists who dared greatly are amongst the most successful (even though often years after their passing). They created from what Kandinsky calls an inner need.

To round this post up I would like to give you one piece of advice that I hope you take to heart: choose your critics carefully. Don't place your trust in anyone who wishes to find wrongs in your work. Know whose critiques to take to heart and which comments to ignore. It might be hard to believe, but sometimes you, YOU, know best.

As always I would like to express my gratitude for your interest in my work and writing. I highly appreciate it. If you would like to help me continue writing these blog posts and learn about forest photography, perhaps you might consider purchasing my eBook The Magic of Forest Photography and/or subscribe to my newsletter.

Carsten Hjort(non-registered)
Well said Ellen!
Your articles and images give me so much inspiration.
After many years i feel my photography has gone from creating something spectacular to expressing more meditative mood pictures. This direction make photography much more meaningful.
Donna(non-registered)
Thank you ellen. I love your work and i think it resonates with me because your vision and passion for the forest comes through in every image! on this newsletter topic, i just wanted to say that i did, at one point in my photography journey, try to use the "rules". it did not work for me. i went back to intuition and what 'feels' right. now, i only stop to analyze when i feel something's not right in an image. everyone will approach their image making differently, of course, but this is what works for me. thank you again.
Pascal(non-registered)
Hello Ellen,
I am French so please forgive me for my English translation.
I agree with your artistic philosophy in photography. I admit that I do not totally respect the rules of thirds in my captures. I have also moved away from humans and preferred nature and especially the forest and the great spaces (landscapes).
Thank you for sharing your impressions. It's a nice article.

See you soon
Pascal
Tracy Edwards(non-registered)
Great blog Ellen and a reminder not to take everything that is said about our images to heart, especially when we are making them for ourselves.
No comments posted.
Loading...
Subscribe
RSS
Recent Posts
Photographer of Transience Beyond The Rule Of Thirds Photography: The Witnessed or The Witness The Missing Ingredient Restore, Reset and Renew, 2021 in Retrospective The Sketching Photographer Interpretations and Perceptions of the Landscape Advanced Lightroom Colour Control The Pitfalls Of Chasing Perfect Conditions Framed: The Edges Of The Image
Keywords
photography creativity inspiration stillness photography tips learn photography creativity coaching storytelling forest Lightroom
Archive
January February March April May June July August September October November December
© Ellen Borggreve
Powered by ZENFOLIO User Agreement
Cancel
Continue