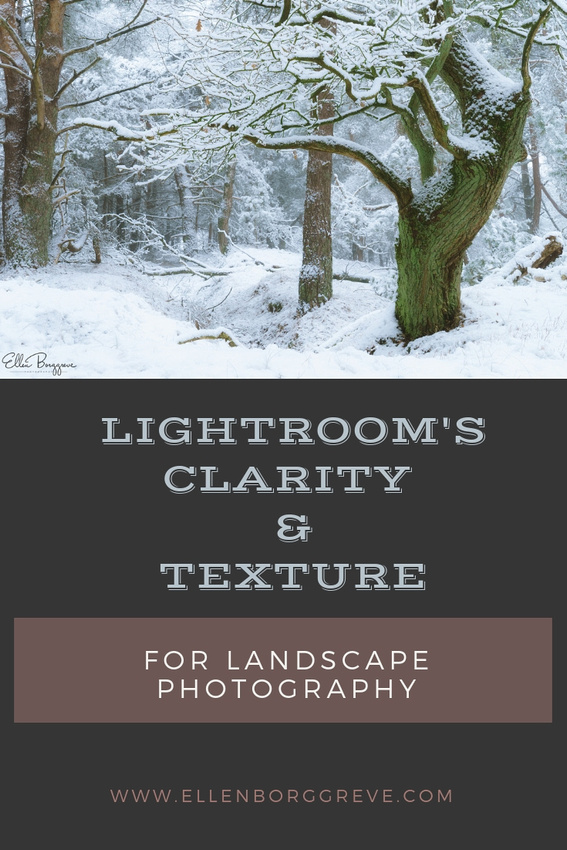 Lightroom's Clarity and Texture For Landscape PhotographyIn the 2019 version of Lightroom (Classic) a new slider was introduced; the Texture slider. What does this slider do, how is it different from Clarity and how can you sue it to achieve different types of effects in landscape photography

The second thing that I am sure you have noticed, is that there is now a texture slider. This was originally designed to help out people like portrait photographers to speed up their workflow and have high quality skin smoothing done in Lightroom instead of having to do this work in Photoshop.

This means it was originally designed to have Texture reduced, which would smooth the skin out. You might suspect the opposite effect to behave a lot like the Clarity slider, but there are a few differences.

I could get all technical and talk about the frequencies on which these two sliders work, but I think it is best to remember that Clarity will make a picture look grungier, because it also affects luminosity (contrast) and saturation. Texture affects the smaller details and has a much less grungy effect.

So, even though this slider might have originally been designed for skin smoothing, how can we use it in landscape, or in my case, woodland photography? I am going to show you the effects in a picture that has quite a lot of texture in it, which is this winter picture with an oak tree. This picture also has a dusting of snow on the branches and the trees on the left. This means we have different sized textures in the image and I was curious to see what the difference would be between clarity and texture. 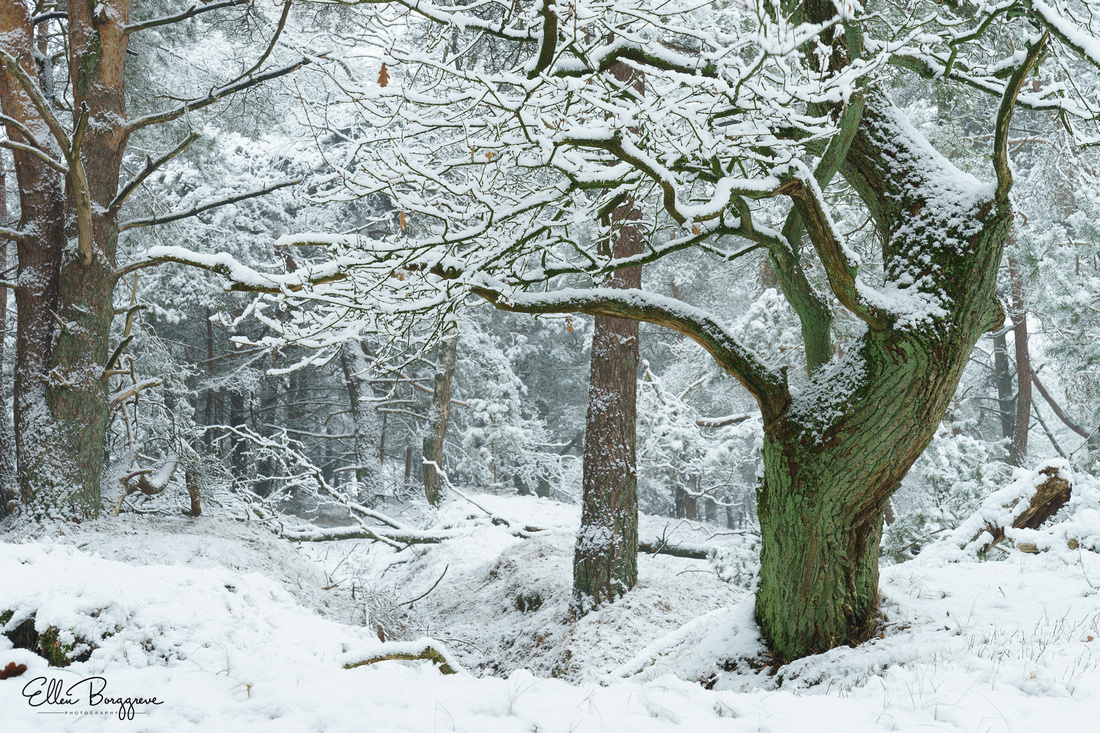 First…let’s add some texture by sliding the clarity slider to +50. This is a setting I would never use, but this is just to illustrate the difference in both effects. You can see that the picture has more contrast in the midtones. The shadows are darker (look at the shadows in the background), the highlights are brighter and the details are emphasised. The snow looks pretty harsh instead of nice and soft. The bark of the tree now looks very grungy indeed. 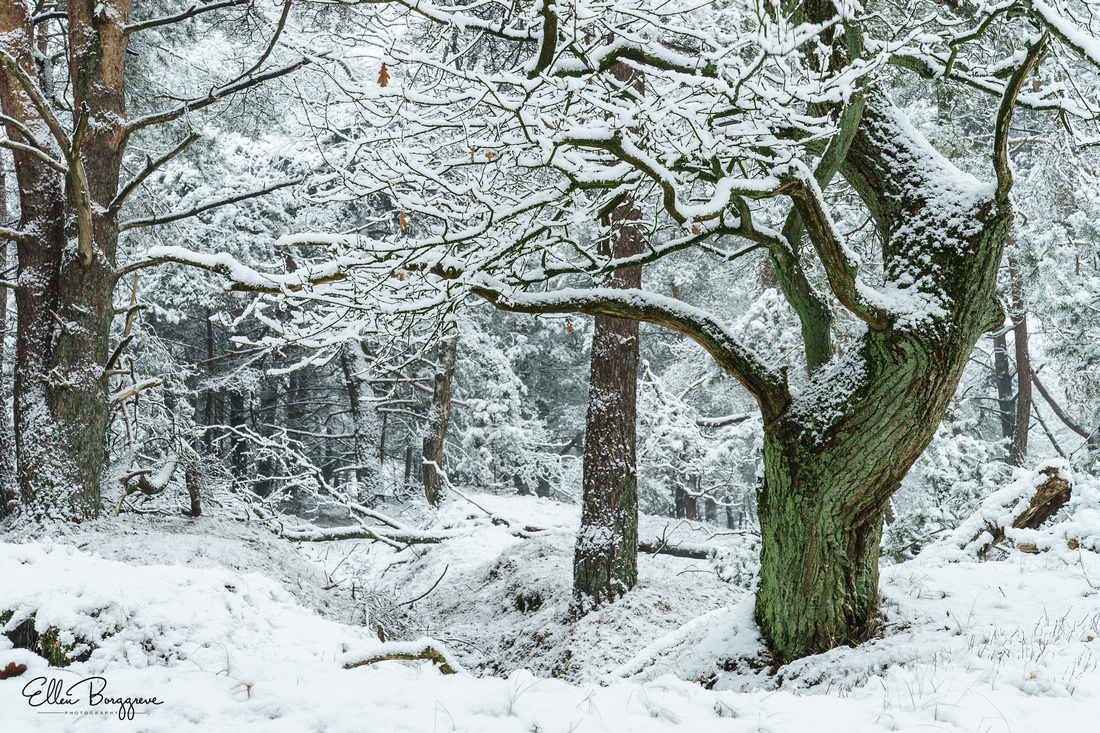 I have reset the clarity slider to 0 and am now going to add Texture by taking the Texture slider to +50. You can see the difference. The effect is more subtle and it appears to be working on smaller details than the Clarity slider. Pay attention to the snow on the trees on the left. You can see that it handles these small snowflakes very differently than the Clarity slider. Again, this is not a value I would normally use, but it makes the difference quite clear. 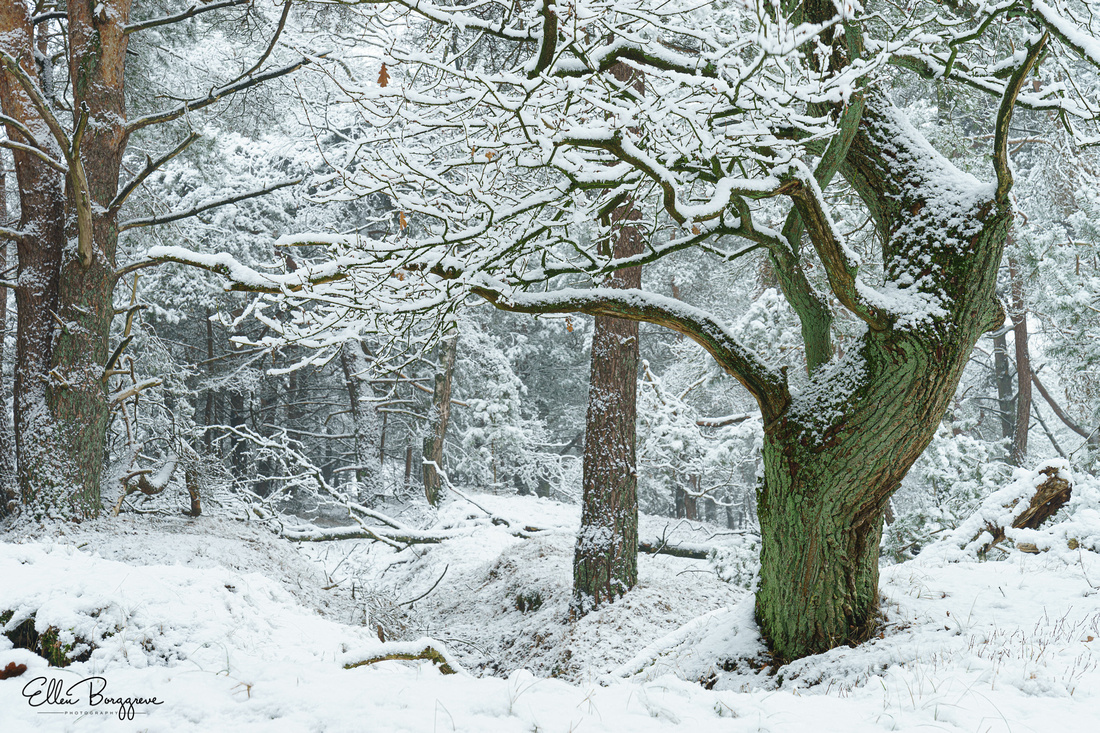 I am also going to show you what a reduction of both values would look like, because in many cases, if you want to keep a dreamy atmosphere in your images, you might want to reduce the clarity or texture. The first picture has the Clarity reduced to -30 and the second picture has the Texture removed by -30. 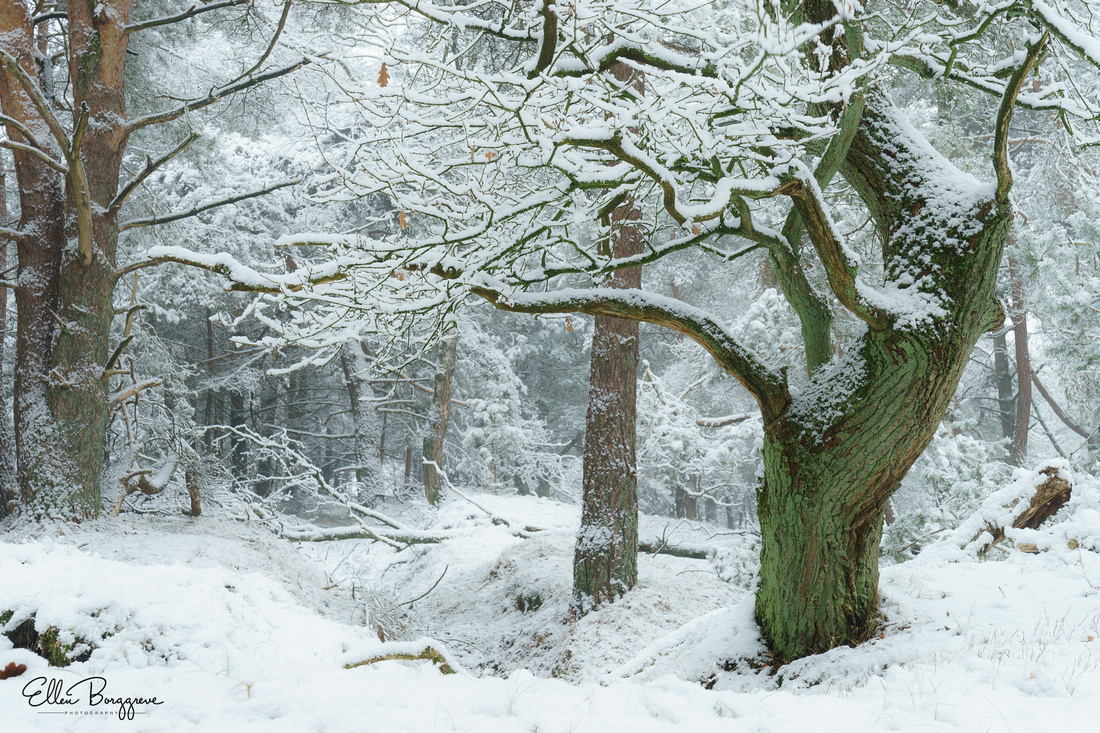 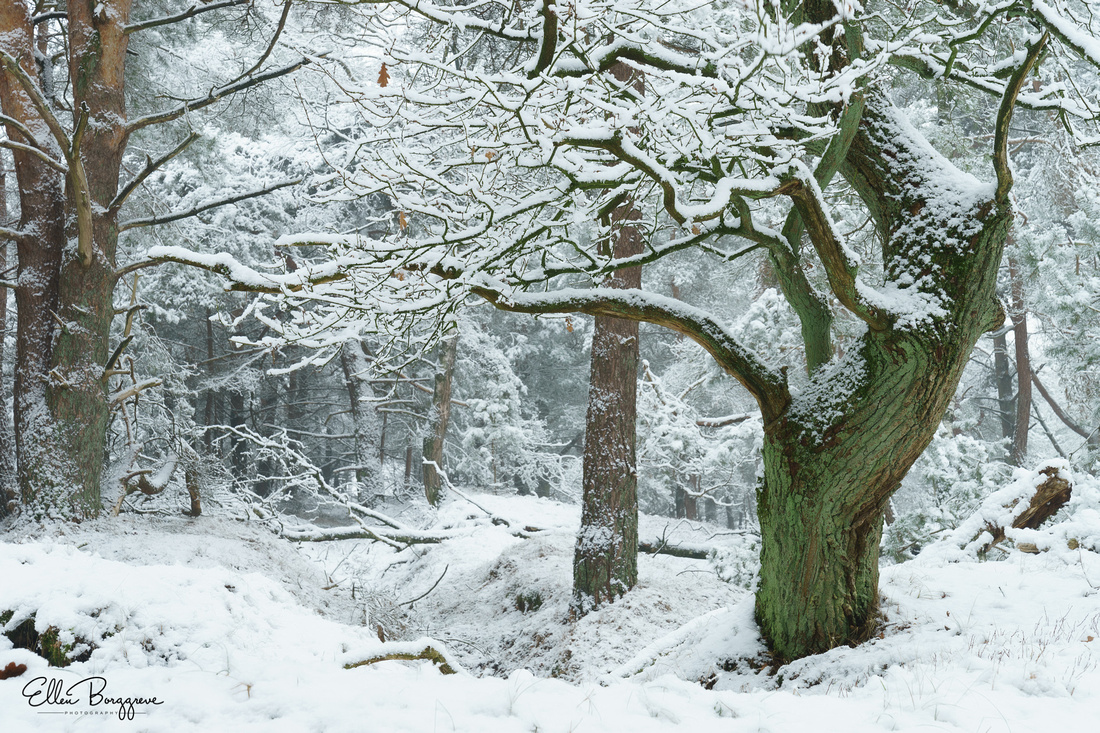 As expected, a reduction of Clarity also affects saturation and contrast, just like it does when you use the positive effect. So it makes the colours look more pastel and the shadows and highlights even out.
A reduction of the texture slider smooths things out, but does not affect the contrast and saturation and colour. I must admit that it looks a bit artificial in this kind of picture, which is surprising as the opposite is true for the positive effect. Also…in skin smoothing a reduction of clarity looks more unnatural than a reduction in texture, but in this landscape (woodland) image, I find that the opposite is true. I think this is, because it works on the smaller details (like the snow) more than on the larger details.

I started thinking about this and thought that perhaps you can have the best of both worlds by combining the sliders and I raised the texture to +20 and reduced the clarity by -35. This looks pretty good to me actually. The fine details are crisper and the slightly larger details and the contrast and saturation become less emphasised. 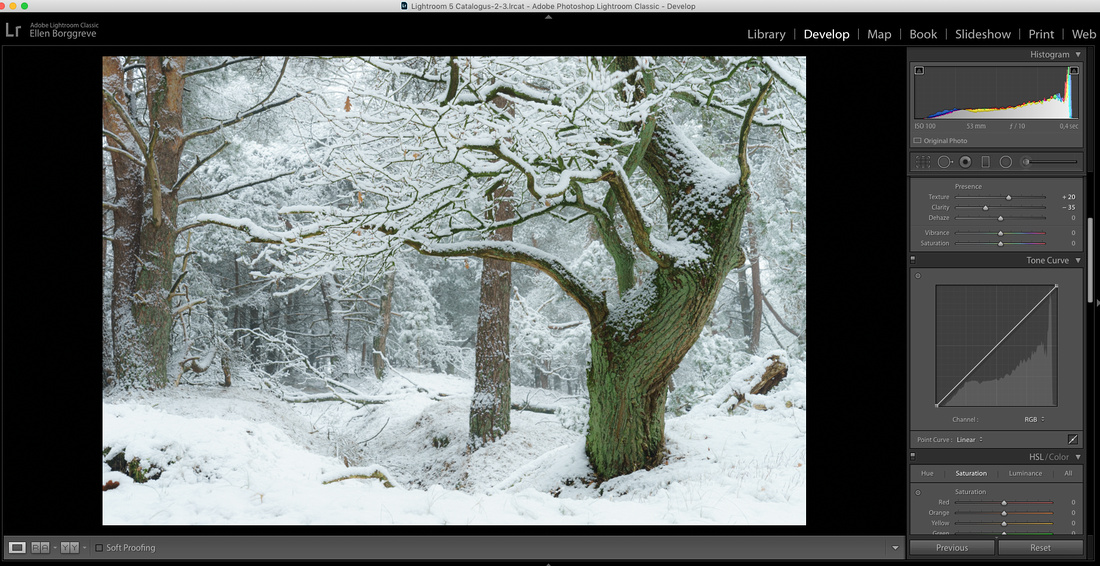 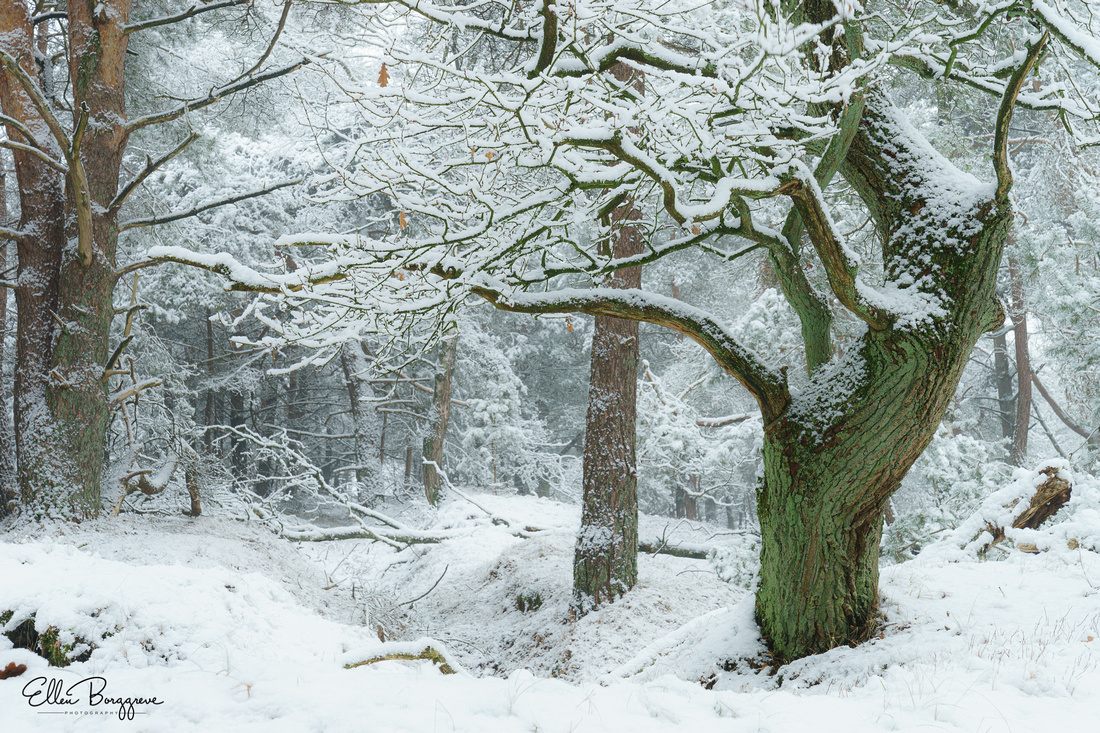 You can also use both the texture and the clarity slider as a local adjustment in Lightroom, which is usually the best way to work in Lightroom anyway.

Let me show you how that would look. You can see that I used a radial filter which I inverted and I also used the range mask in color, sampling the tree, to create an accurate mask. I chose +25 for Texture in this case. 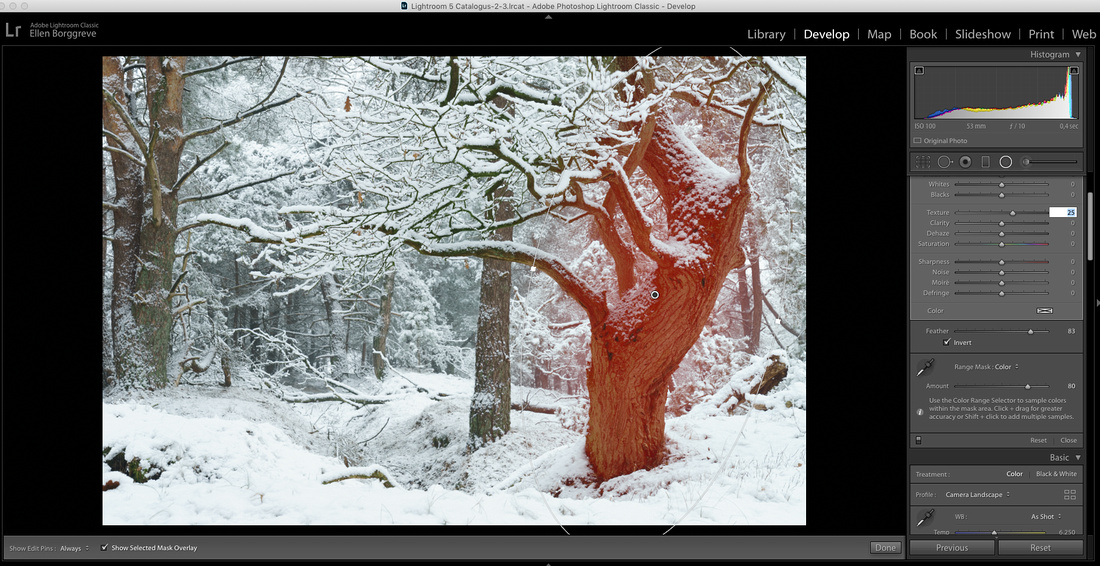 Now I am duplicating this same radial mask by placing my cursor over the pin and right clicking and choosing duplicate. Then I uncheck the invert box and I put all sliders back to zero by double clicking on the world “Effect” on the top of the panel. Then I reduce the Clarity for this area to -35%. I choose the brush in the radial filter, click on “alt” to make it erase and I erase the effect from the branches of the main tree. 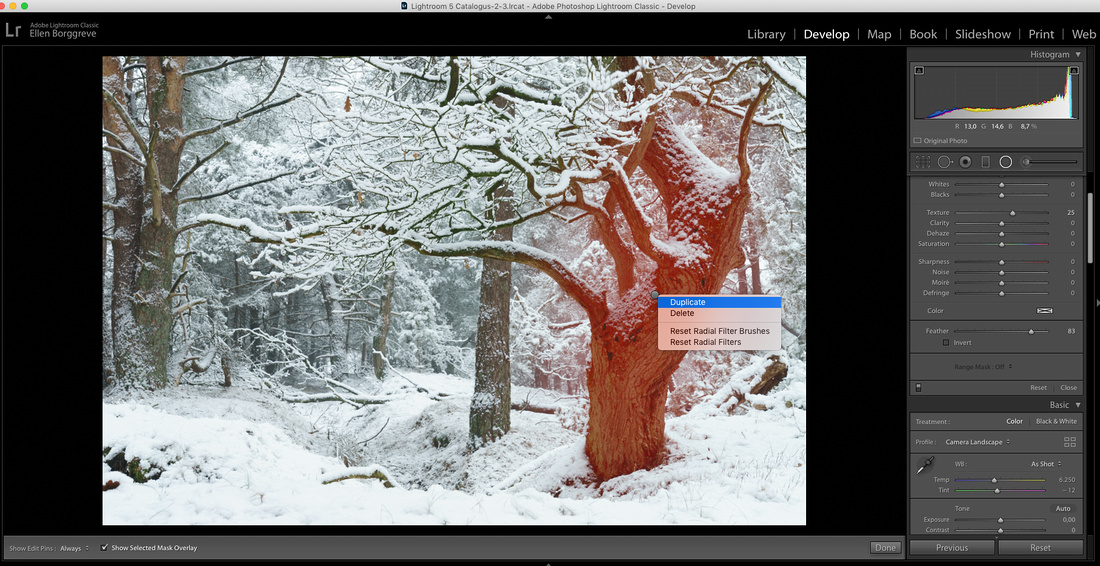 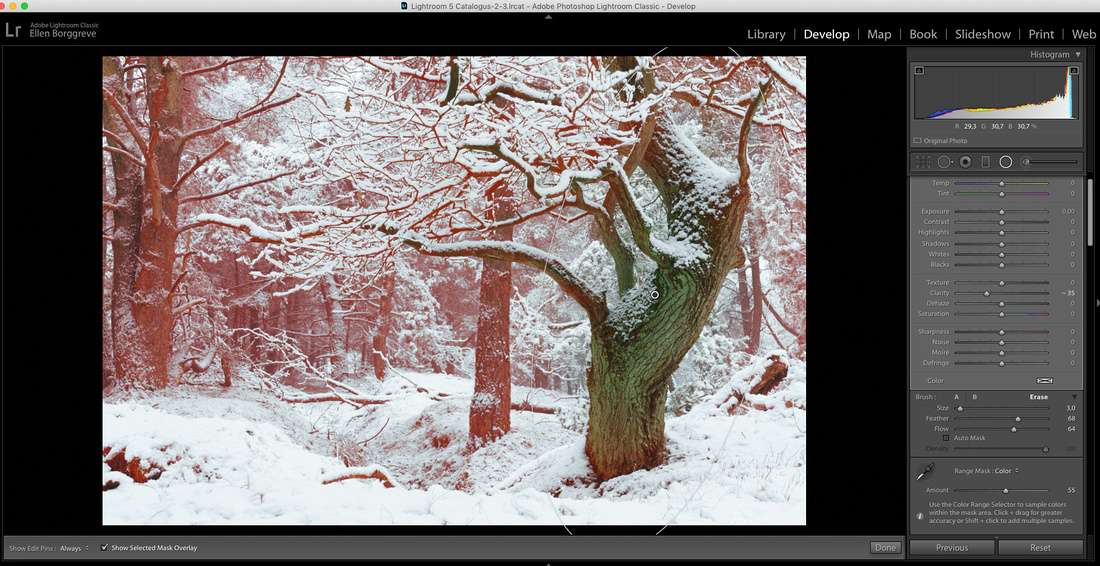 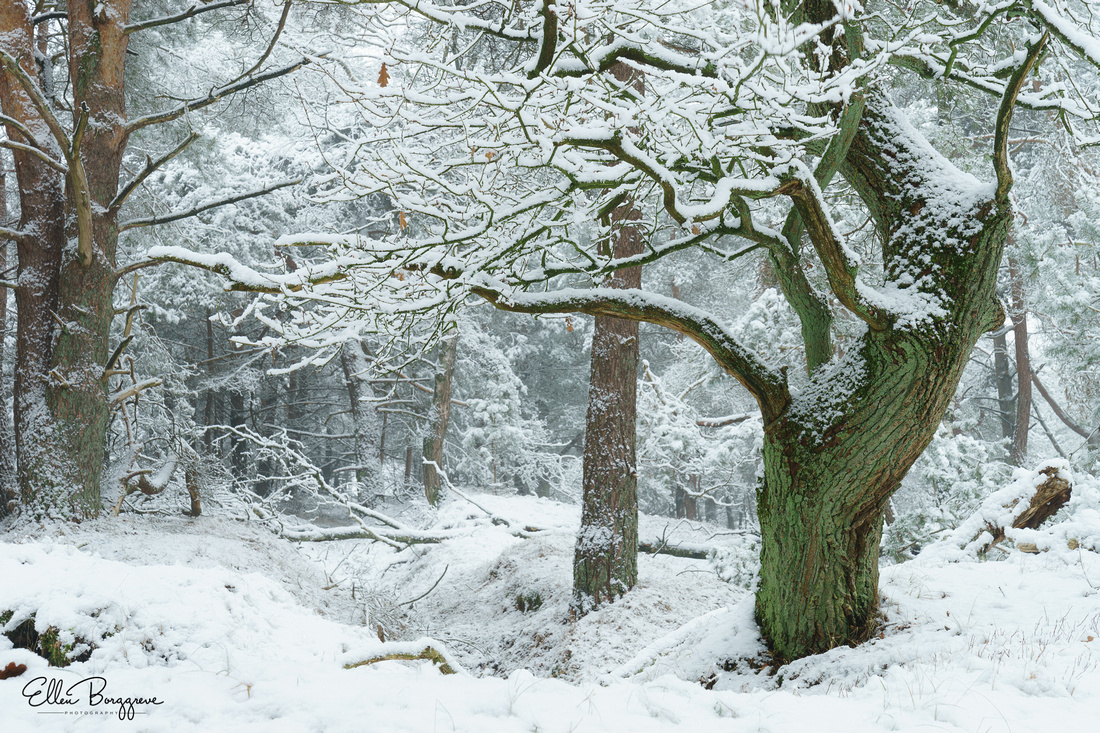 It is a matter of taste which one you like best, but you can see that these sliders could give you a wide range of effects when used separately or combined.

Just to help you understand which details are affected by the Clarity and Texture sliders, I have also picked a waterfall picture raw file. This will clearly show which slider will effect the moss and the water texture more and which one will empasize the rock detail.

First...this is the raw file with camera profile added 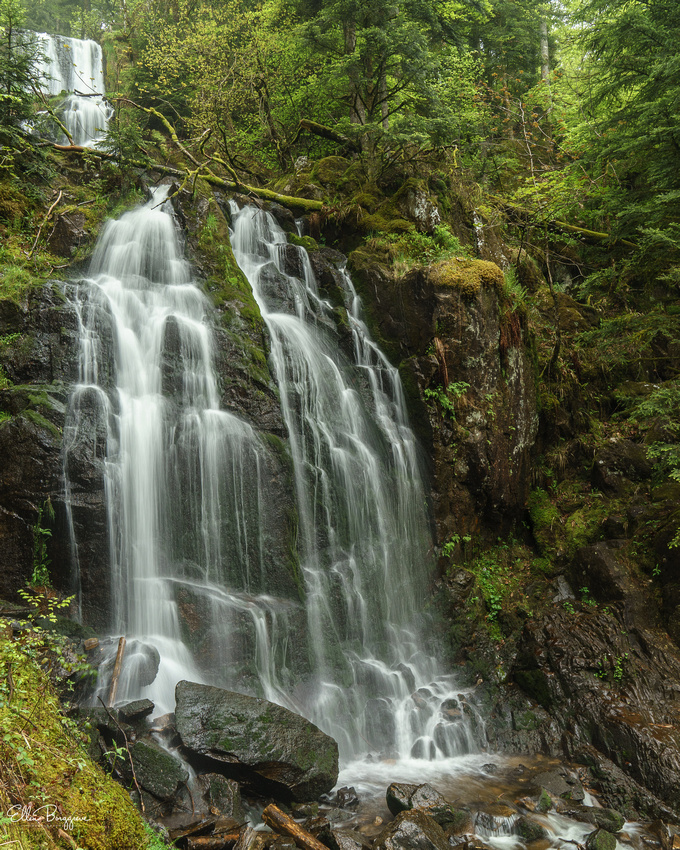 Then I reset the Clarity and adjusted the Texture to +50. Look what this does with the water, it looks like hard pencil stripes now. 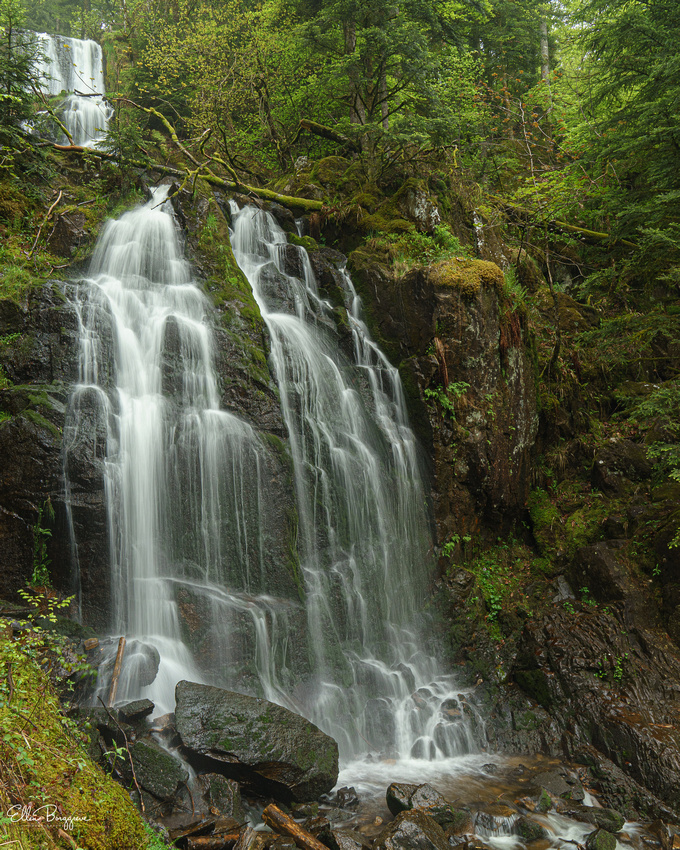 I reset all sliders and chose -30 for Clarity 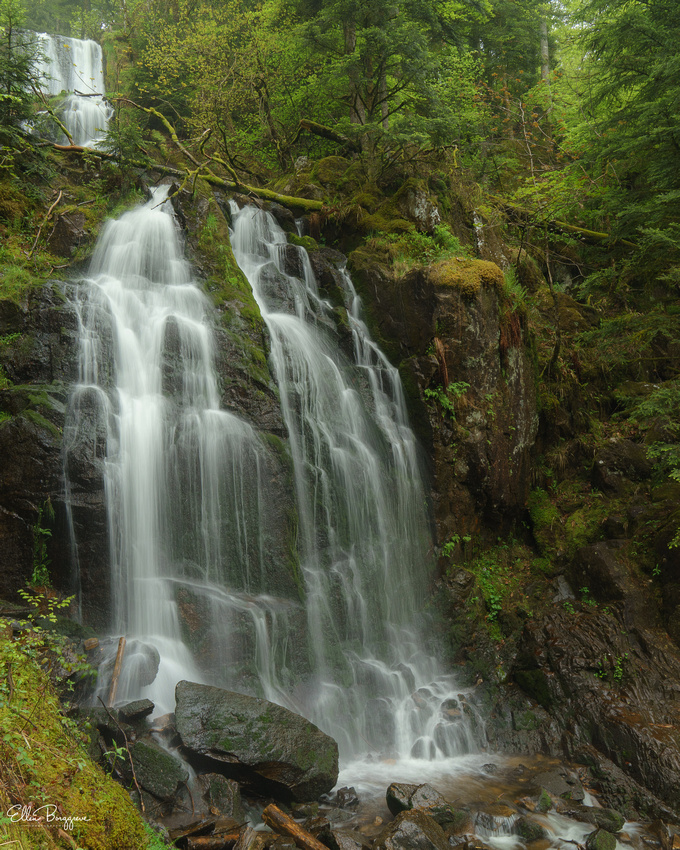 And after a reset I reduced the Texture to -30 . Here you can see the opposite effect, the texture in the water is softened more than in the picture with the reduced Clarity 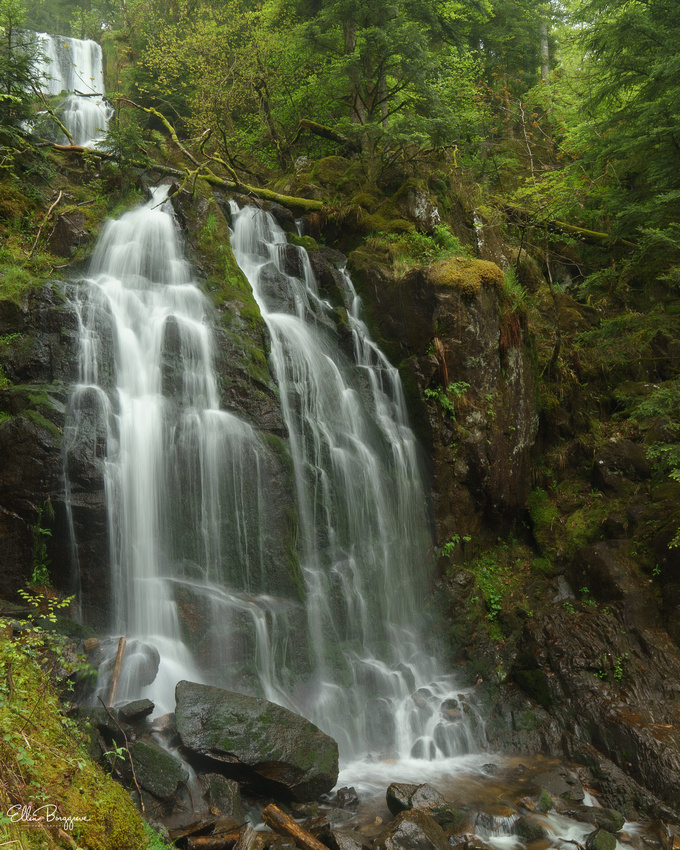 Then I entered  +20 for texture and -35 for Clarity for the picture below. The water looks pretty harsh and because the Texture slider affects the smaller details more, you can clearly see that the small leaves in the top right are looking a bit too crisp for my taste. 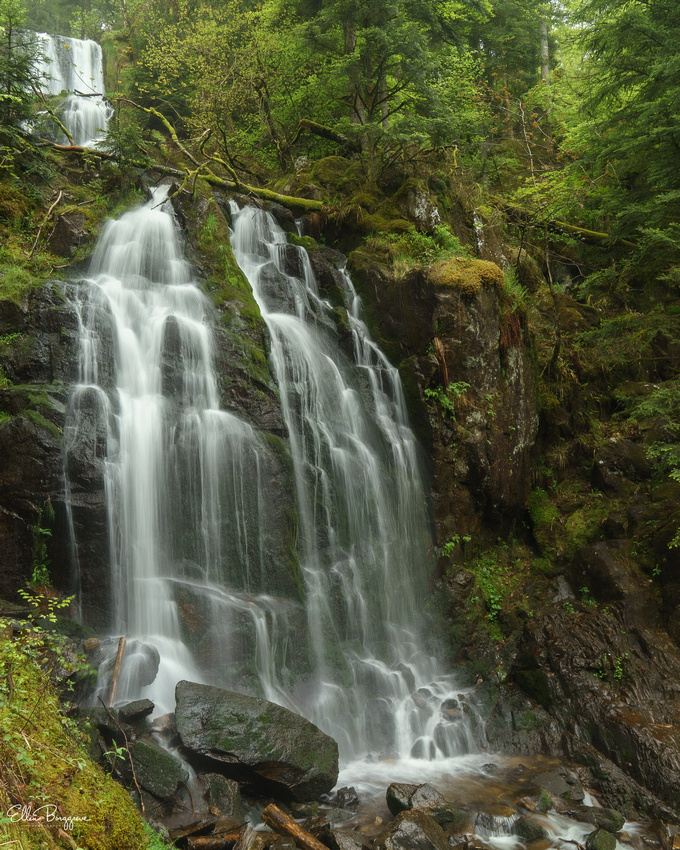 And for the picture above I dialled in -30 for Texture and +20 for Clarity. The water looks smooth, the smal details are softened, but the somewhat larger details are emphasised.

This, I think, gave the most interesting result.You can clearly see how the Texture slider emphasises the moss (the smaller details) and how the clarity slider gives more depth to the water, because it adds contrast to the midtones. Clarity also empasises the highlights and shadows more. Both effects look dreamy, but in a  different way. I actually really like the effect in the picture above, the water did not start to look harsh, because the Texture was reduced and the larger details jump out. 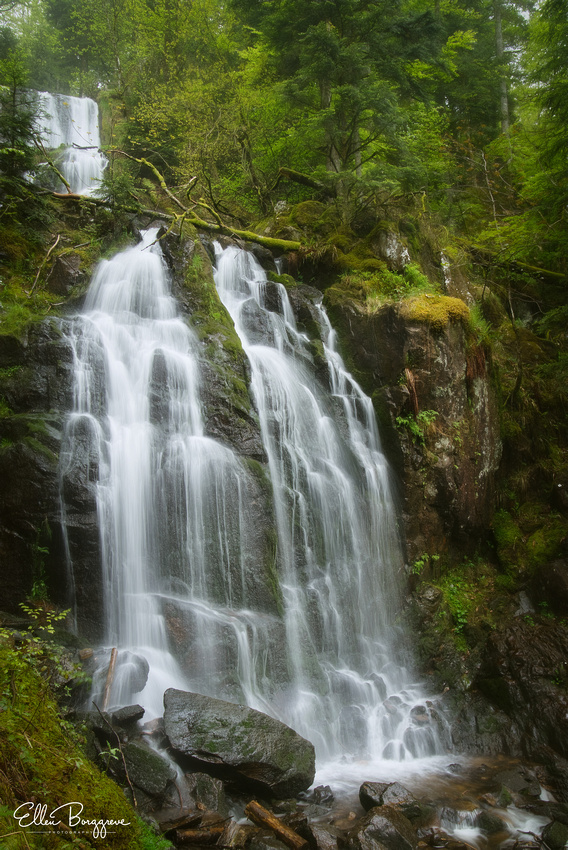 OverflowAfter the massive amount of snow of this past winter melted away, this waterfall looked spectacular. Fortunately the mist that had been covering everything from view lifted somewhat creating this soft and idyllic scene

Would it replace the use of Photoshop for me? No...I really like how the effect of the two sliders combined can make a picture look rather dreamy, but Lightroom just can't compete with the cleaning up options in Photoshop like the clone stamp tool and the healing brush. Also, I like to build up effects in layers and the painterly effect that my pictures are known for, is built up in several layers.

So yes, this is a really nice addition and I will most probably use it, but I can't see this replace the effects I like to create in Photoshop.

I hope this little comparison between Clarity and Texture gave you some clarity about when and how to use them.

If you would like to learn more about forest photography and learn how I edit one of my pictures step by step, please consider purchasing my eBook The Magic Of Forest Photography

If you'd like to receive regular updates and receive my FREE eBook, click on the banner below